There’s a lot of discussion on the subject of IOTV vs Plate carriers. We would like to present our argument as to why we prefer the IOTV. This article is not to bash the hard plate carrier, nor is it a comparison of ballistic performance between the two armor systems. It is based on our experience with the two armor systems and will reflect what we have seen while using both.

We have a lot of experience testing body armor. We’ve conducted over 100 ballistic tests to date; of those, more than half were full-scale Level III, IV, and V plate tests. Our most recent project was provisioning 163,000 sets of armor for service in Iraq & Afghanistan. In addition, we have extensive experience with the various threat systems, including rifle rounds (both 5.56 and 7.62) as well as those from carbines and machine guns. 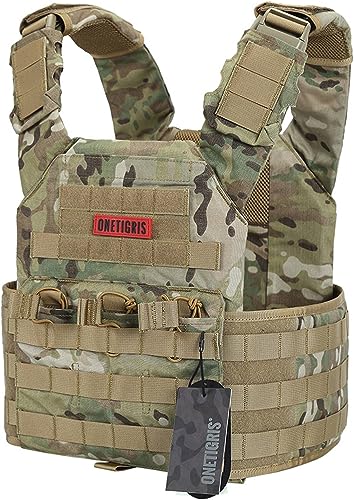 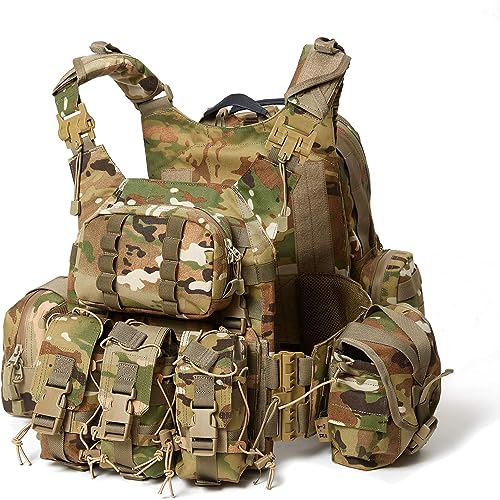 For the HPC (hard plate carrier) tests, we used a “one-size-fits-all” model, which is typical of most government-issued hard plate carriers. It was part of a large lot of HPC’s procured for use in OEF and OIF. The IOTV tested is also one-size-fits-all and was issued to a member of the U.S. Army’s Special Forces (SF) community. It was actually issued as part of his pre-deployment kit for service in Afghanistan.

The HPC tested is currently available from U.S. government sources, but is being replaced by a new system (the Interceptor Body Armor System – IBA). The IOTV being worn by our tactical subject is still in use with some SF units but will be replaced soon due to weight issues (19 lbs without magazine pouches!) and other factors. This article does not reflect any recently fielded systems; it reflects only what was available to us during the time frame that we conducted these tests (late summer/early fall of 2005).

The results in the table above speak for themselves, with the exception of #7. Our ballistic gel testing indicated that a Level IV plate without soft armor and applied correctly to the chest can stop 7.62mm AP M80 at approximately 750 ft/sec. The issue is with how we simulated this test using our live body subjects. Due to anatomical differences between different people, it becomes very difficult to simulate all aspects of a true ballistics test using human subjects – especially as every person will be positioned differently on their back when struck by an impacting round. For example, some will have their heads off the ground (as seen in Post-Mortem#7), which can cause even further injury to the cervical area. Post-mortem #8 is a good example of what happens when the shooter has their head off the ground. These photos cannot be seen in our video presentation, but are worth noting here:

Even though we could not simulate the test exactly as per military specifications, we feel that this was pretty close to a worst-case scenario for armor performance and protection against 7.62mm APM80 at short range (less than 100 meters). In addition to testing with gel blocks, we also conducted arm and leg shots on tactical subjects wearing both armor systems. This allowed us to compare “real life” ballistic results between these two systems under different conditions. Some of those tests had best-case and more realistic worst-case scenarios. Here are a few of the results:

This table is easy to read, with the exception of Post-Mortem #7 and #10, as those were taken at greater than 300 feet per second. The reason for conducting leg shots was due to several factors, including anecdotal evidence from our deployed troops indicating that they were not wearing their hard plate carriers in certain situations where they would be exposed to some risk of weapon fire or blast pressure. Our tests showed that without a hard plate carrier on; the soft armor can stop many rifle rounds in both bulk rounds as well as individual fragments, but tends not to stop lower velocity rounds. Even with a hard plate carrier on, there are some rounds that will penetrate soft armor and cause life-threatening injuries to the leg area.

The bottom line: wear your body armor correctly at all times!

In conclusion, we feel that both of these systems offer good levels of protection for our troops in Afghanistan and Iraq. We can put an end to arguments over which system is better by saying this: Both systems are very capable of stopping many threats faced by soldiers today – but neither one is perfect. Each side has different strengths and weaknesses when compared against each other. Our troops are trained to use these systems properly – meaning wearing them correctly (hard plate carriers worn OVER soft armor) and using them as designed (

The iotv vest (Improved Outer Tactical Vest) is a lightweight ballistic vest, designed to protect wearers from shrapnel that may be encountered during the use of certain firearms and explosives. It’s designed in such a way that there are no protrusions or hard angles to impede the wearer’s ability to move freely while on the job. The iotv vest also accommodates most pouches and accessories. The iotv vest is designed with side and front soft armor that can be worn in conjunction with hard plate inserts to provide the wearer with ample protection from those who wish them harm.

The iotv vest was developed by a former US Navy SEAL, for use by police officers on the job or military personnel serving overseas. As peacetime continued many found themselves involved in shooting situations where they were not prepared due to lack of proper equipment. This led to further developments of the iotv vest and other gear (such as load-bearing vests) so that law enforcement officials, military personnel, security contractors, bodyguards etc., would receive adequate protection when required.

Today these various industries need to find a balance between peacetime and wartime. Most individuals accept that there are times when they may be required to use lethal force or carry out dangerous missions where their lives may be at risk. To ensure they do not have an adverse effect on the safety of other people, these operatives will dress for duty in a manner designed to provide them with ballistic.

Plate carriers are a fundamental part of modern soldier’s equipment and they are used in all armies. The technology is constantly being improved and new types of body armor are being produced that makes it possible to add more protection while keeping the weight down. Plate carriers can now be divided into two main categories, soft-shell plate carriers, and hard shell plate carriers

There are also other types of tactical vests available, such as soft-shell chest rigs; and hard shell plate carriers.

A plate carrier (PC) is a vest designed to be able to carry ceramic or metal plates. These plates will protect the wearer’s vital areas from small arms fire. The plates that can be used in a PC are AR500, Level IV plates. There are also other options such as Dragon Skin and UHMWPE.

The hard shell plate carriers can be divided into two categories: MOLLE (Modular Lightweight Load-carrying Equipment) and single-piece/one size fits all. The Molle version gives the user the ability to attach pouches and other gear anywhere on the carrier. The single-piece version will have pouches built in and can not be changed or added onto. The carrier is made of a tough material that resists tearing and can withstand the friction from the plates rubbing against it.

PLATECARRIERPLANET.COM IS A PARTICIPANT IN THE AMAZON SERVICES LLC ASSOCIATES PROGRAM, AN AFFILIATE ADVERTISING PROGRAM DESIGNED TO PROVIDE A MEANS FOR SITES TO EARN ADVERTISING FEES BY ADVERTISING.